Some ISP hardware I got

So we have a pretty good relationship with our ISP and no I mean it, I don't derive some sort of masochistic pleasure from it - they're a good ISP for the most part (our package with them ain't too good but I mean ya know it's what we bought). But they've become I guess real friends over the time we've been with them which has been a VERY long time (many many years).

As you can see I got quite a lot of stuff: 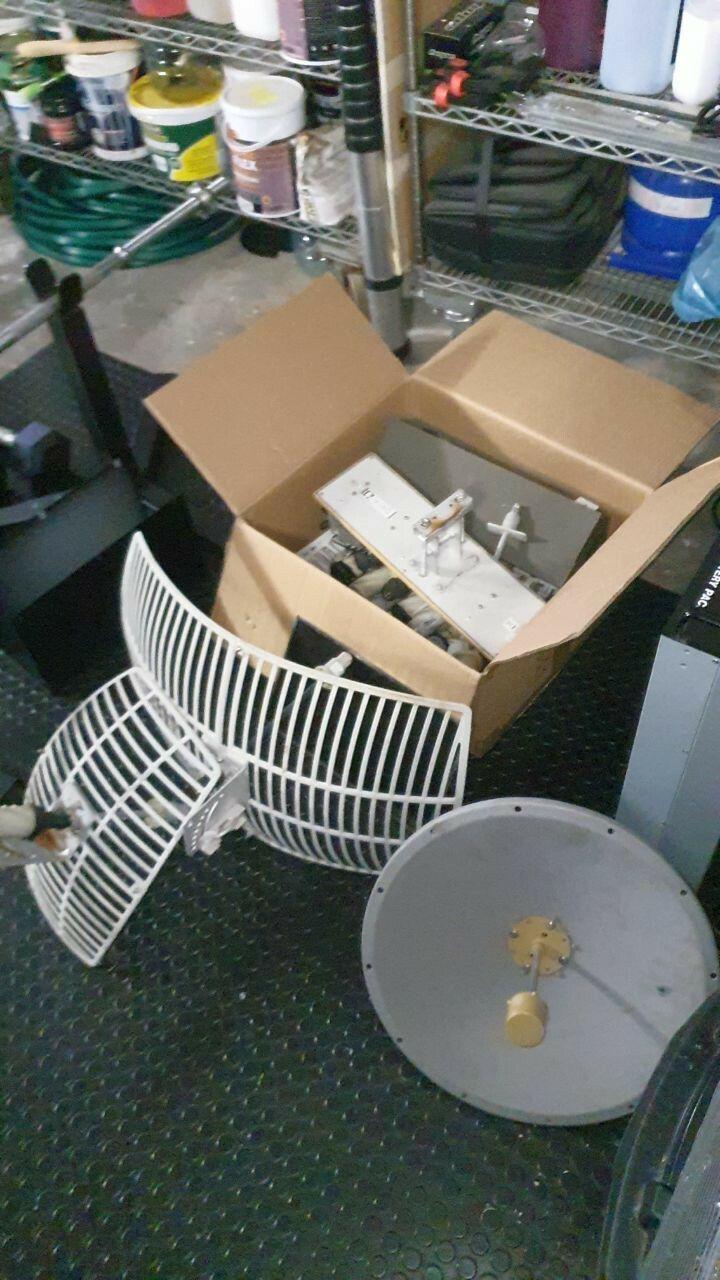 So now that I've got you salivating at all of this, let's see what I actually got and what I ended up doing with it.

First of all I got a lot of MikroTik Grooves. These are MIPS machines that run MikroTik's proprietary RouterOS firmware but it is very extensive in it's feature set so it's a pretty good system but what really makes it great is that they never stop providing you updates (that's right, each license, no matter the level, receives lifetime updates). I had quite a few of these to update and test which ones were in working order. Some were, some weren't but I'd say the majority were. The other ones not working I think some can be fixed possibly with some sort of manual flash as they seem to flash a particular strobe that might indicate some glistening hope for them to be redeemed. 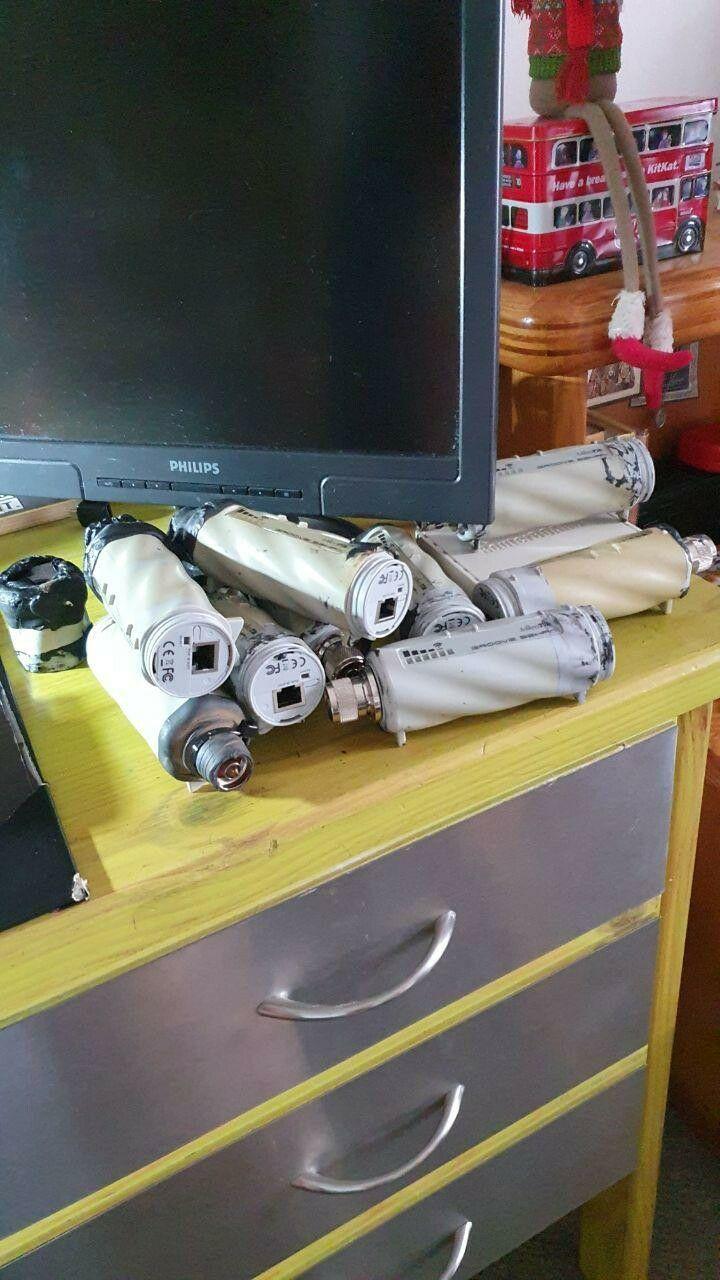 Here you can see some of them that I had to clean the bitumen (the black water proofing grub) off of. Some more of them.

This is what it looks like when powered on. If connected to a wifi access point it will show radio strength on the other LEDs, The main LED here shows network activity
and flashes on link activity. I can tell that the cleaning process was most definitely not fun but admiring them all was as you can see. I also scored a sector antenna of which you can use these on too. There
are also two directional antennas there too for use with a reflector.


I also got this neat dish antenna (the reflector). It is hella based. I really wanna use it with some of my MikroTiks. Here's a close up of the sector antenna. You can see that it has a mounting bracket on the back of it to wrap around a mast. Also in the back you can see some reflectors for use with these directional antennas. I also gained some MikroTik devices other than Grooves (I must note all are capable of the same features, they can bridge, router and become access points). I got some of these really cool case-less routerboards: I also got one of these nice routerBOARDS which comes in the form of a switch-looking device. I now use it as my main switch for all of my networking devices
on my side of the house. 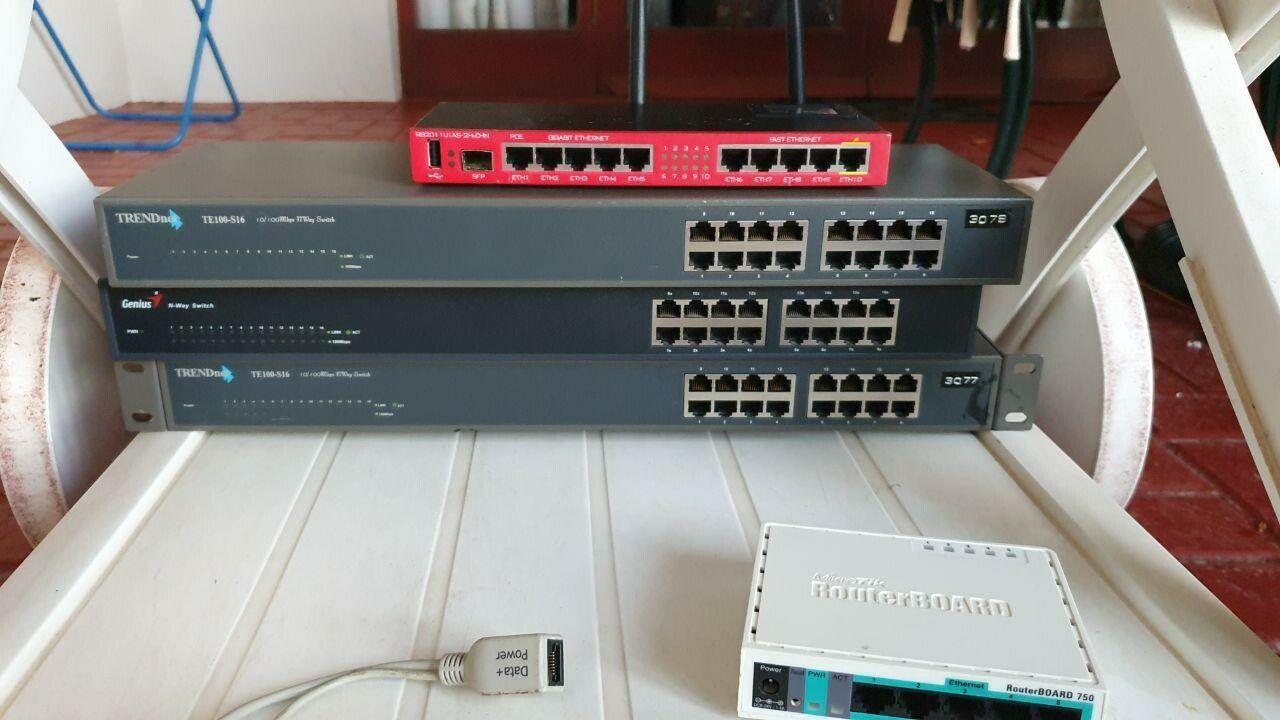 The red routerBOARD was cool but there is something fucky on the circuit and it fucks out, it notices link activity on links not plugged in and yeah. Just
doesn't work. Got it to work for a little while - then it ends up acting up and stopping or becoming too unstable to use. It had this really neat touchscreen. I also ended up using this white routerBOARD below as an access point in the garage (which really needed it), it also means the swimming pool now has good wifi.