I have another post still due with regards to Bester’s sendServers and sendHandler commands but because that will take some time to write up I decided I would make a progress update as the specification for those functions is not complete (it changes as I code, and yes a final post will be made once the specification is stable). Anyways, let’s get into it!

The whole flow of client to server, server to handler, handler to server and server to client (as described in the introduction to Bester post) has been implemented and tests exist to test that functionality out. You can now have a client T send a message of type S to the server J and the handler for S-type messages will handle the message. S will do what it needs to and then, over a UNIX domain socket, transfer its response back to the server, J. Another little change to mention is that upon connecting to the handler we open a new connection to it each time, instead of the previous mechanism that connected on startup and used that socket for all messages of type S. Anywho, when server J has gotten a response back from S it will then see what the command is, these are sendHandler, sendServers and sendClient. For what I am speaking about it is sendClient we are interested in. The whole flow as described in the beginning works and the server will check the list of provided clients (from the message handler’s response message) and send the payload of the message handler to each of those users.

A small little mention (rather big in my opinion) is that we now have a working server-to-server handling mechanism in response.d (which handles sendClients, sendServers and (soon) sendHandler), in fact the images you see later are of that all working (which also implies a working message handler system, as described above).

Exceptions everywhere and code clean up

It is worth the mention that exception handling is making its way into the codebase. For example, a failure to send to on of the clients in the scenario mentioned above will not break the whole response-handling mechanism but rather skip to the next client and attempt sending to it. It is quite shoddy right now but that is just to have it in a non-breakable state. There will come a time, I think in probably a month’s time whereby code clean up can be done.

Speaking of code clean up, a lot has been done to abstract and modularise everything. Most message handling code is now part of the “handlers” package and the entry point of through a MessageHandler object. Things will continue to follow this OOP design pattern till I am satisfied with the code hiding such that each module only calls external functions in those other mdules and the code in each module is solely related to the module itself - not another module.

Some photos of it working

To wrap up this post I think sharing the latest screenshots of it working would be a good idea.

Client A - Server B

What you see above is a client A connected to a server B, and the right-hand side pane is client A authenticated with
the server and sending a message to it (of type “type1”). The output of the constructed is then printed below it. 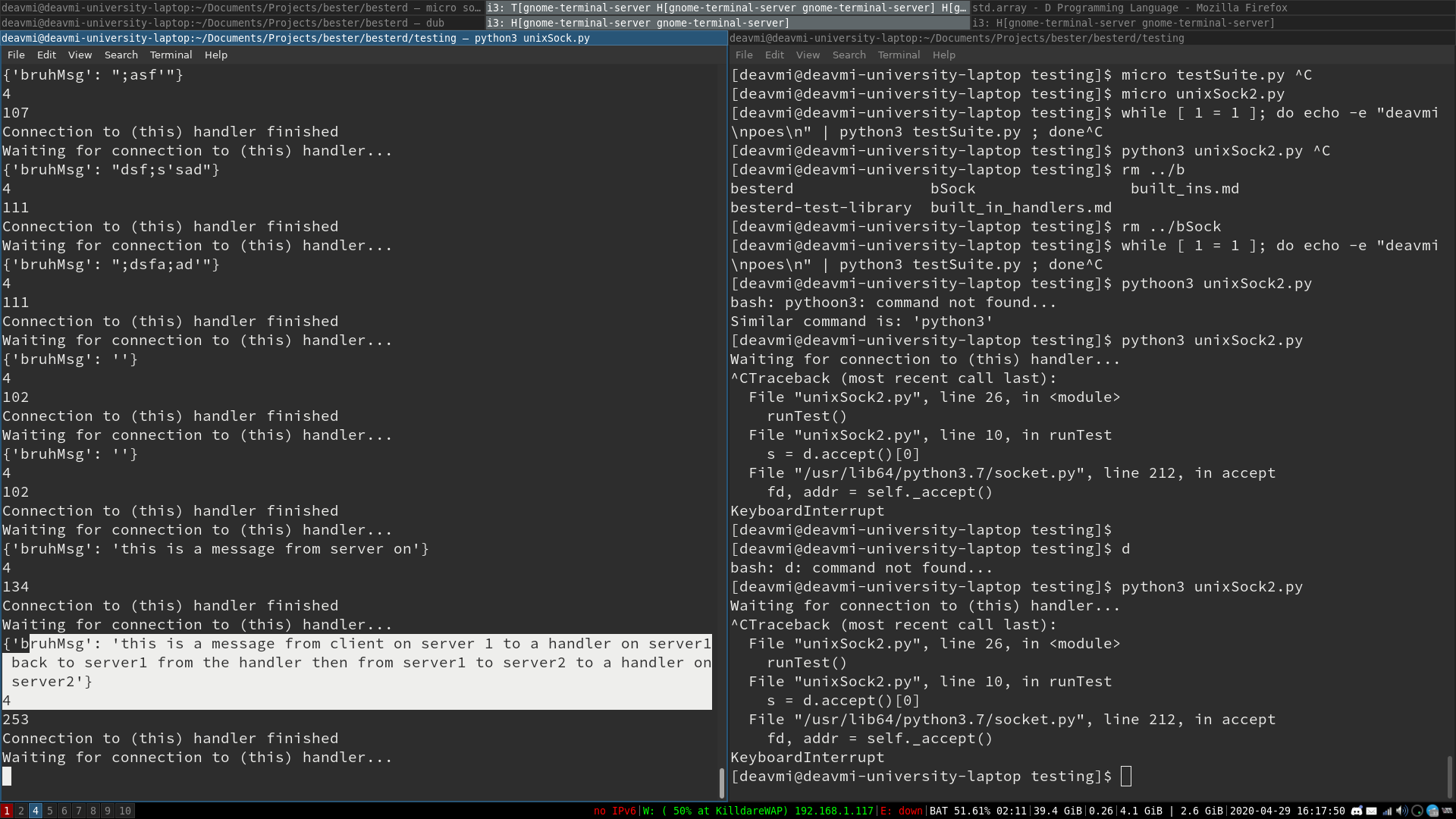 What you see here is handler C receiving the message that was sent from client A to the server B. It has now been dispatched to the message handler C which has now printed out that received message. 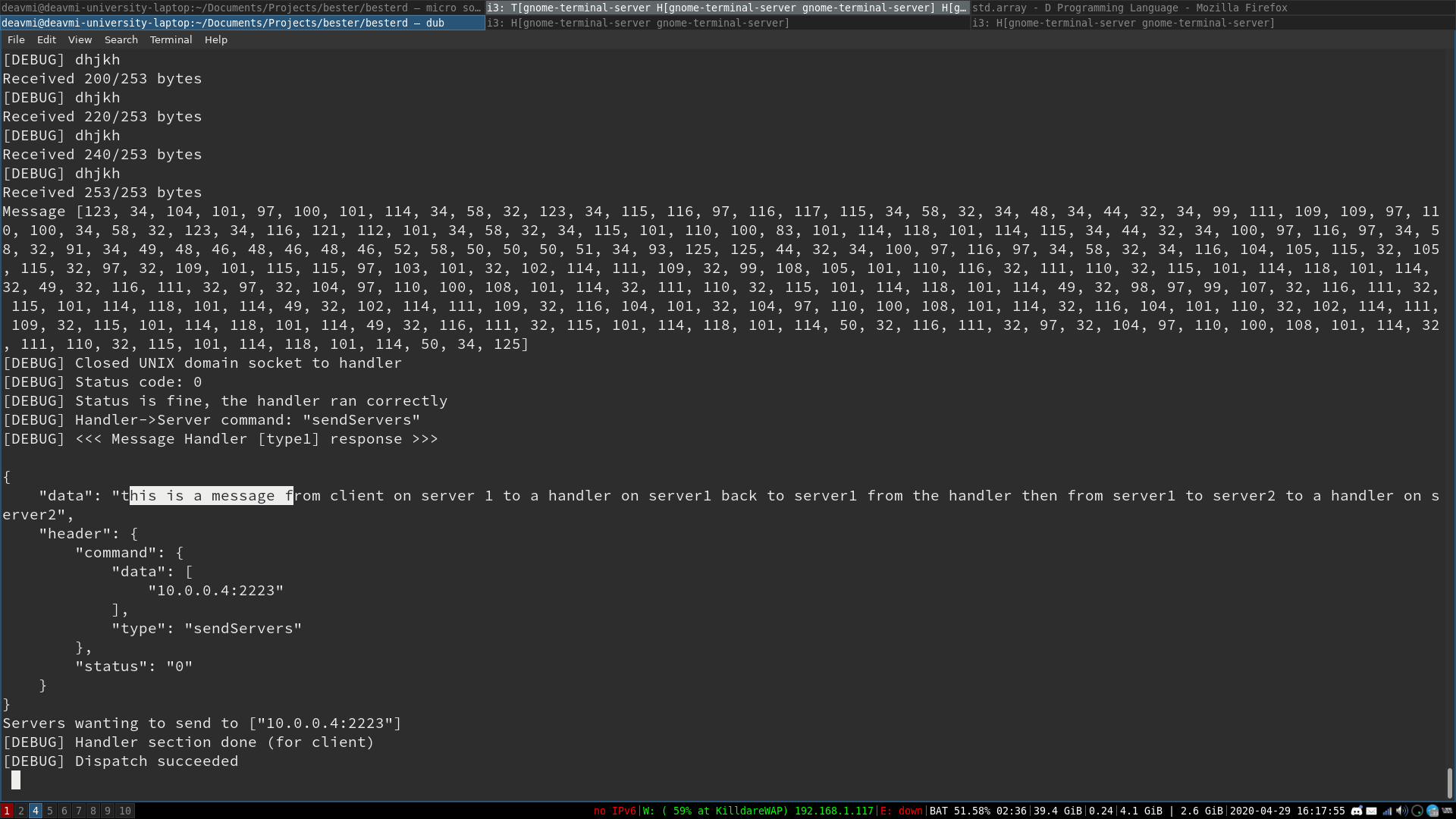 Server B - Handler C - Server B 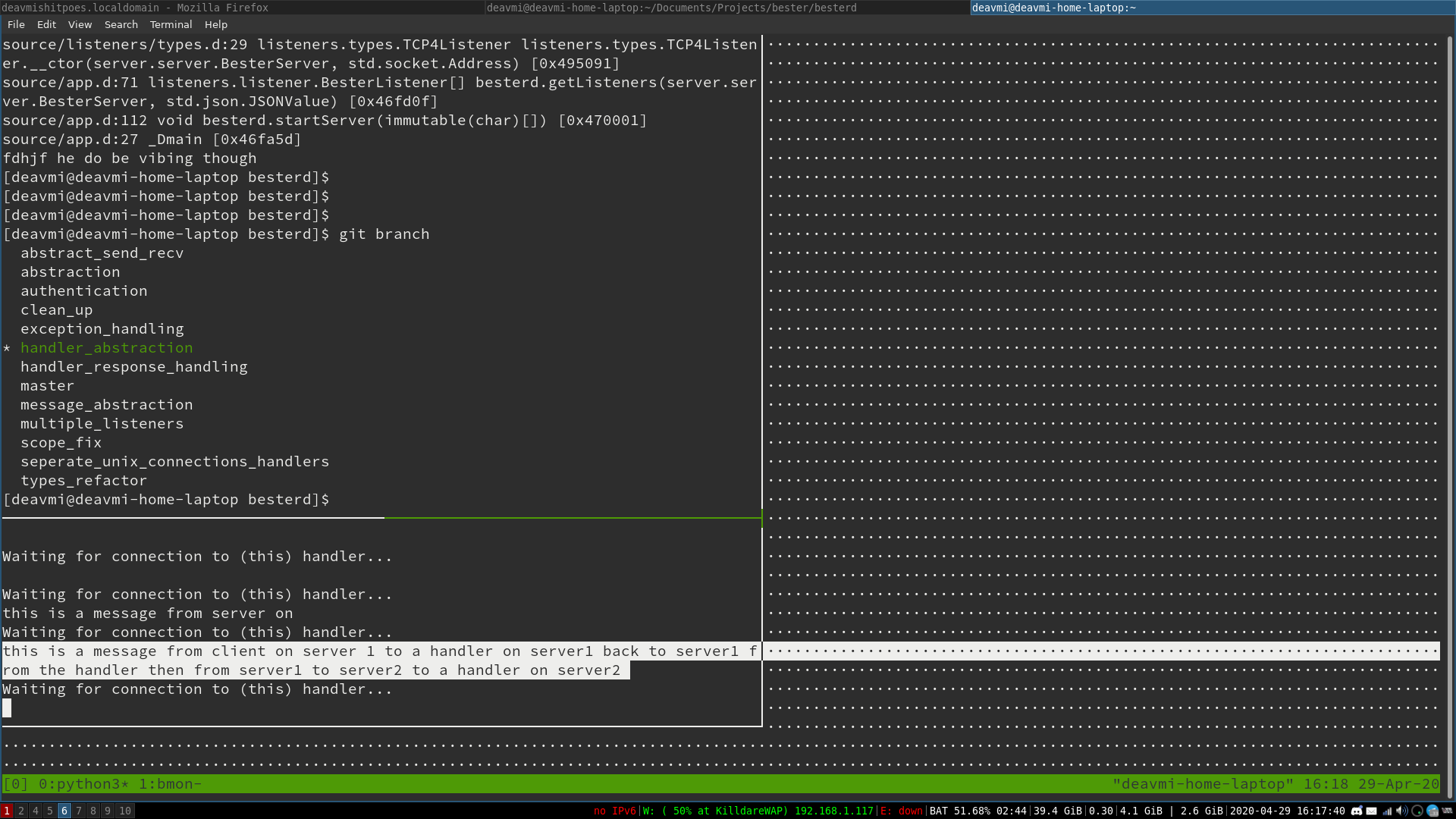 What has happened now is that the sendServers command from server C has come into affect and transferred the
response payload form handler C to server D, the received payload has the “scope” field set to “server” and hence
no authentication needs to take place. The same handling steps however do occur, therefore the payload has a “type”
field which will be used on server D to direct the message to the corresponding handler which in this case is handler
E, which you can see here above has received the payload. 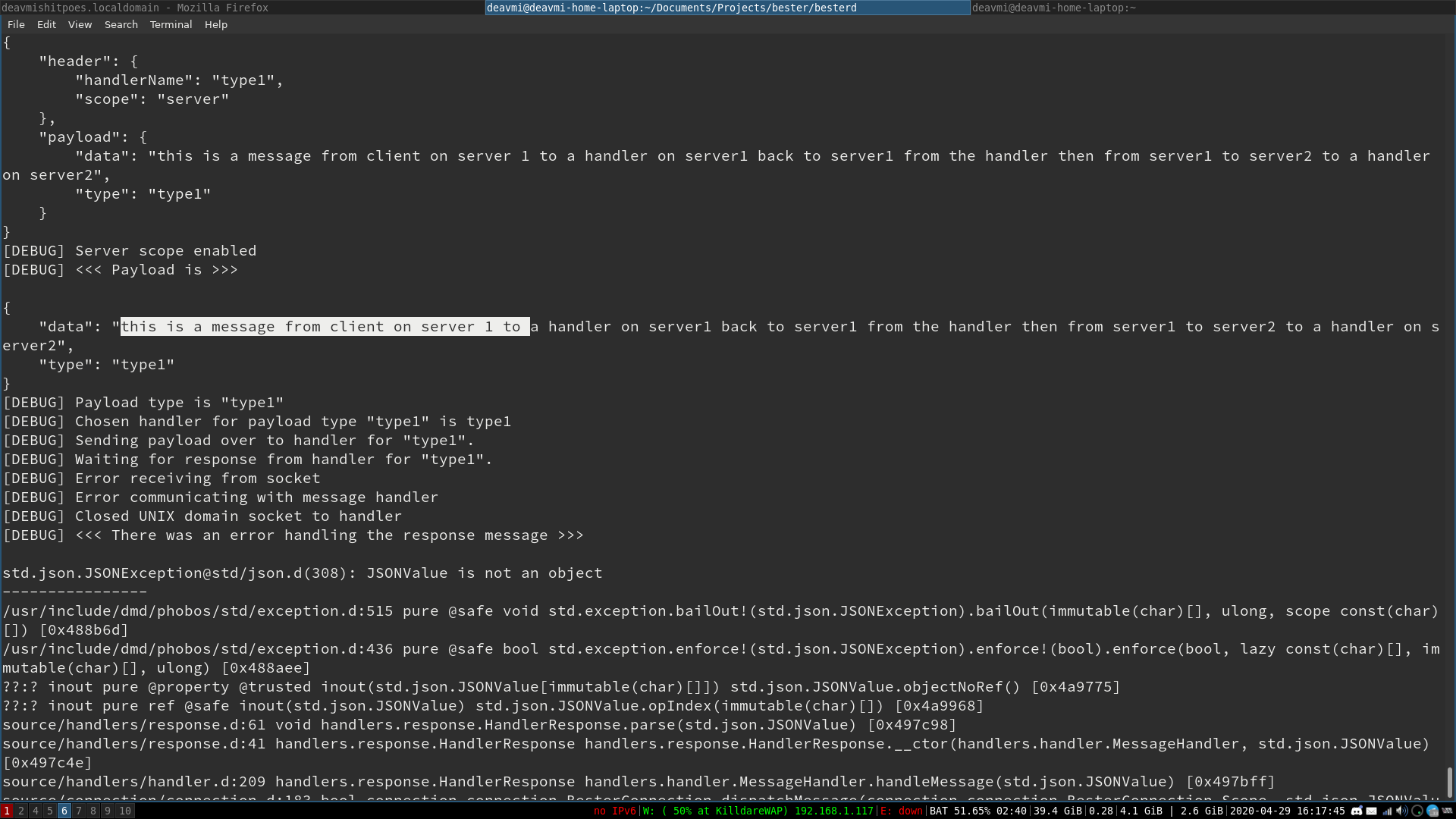 Clearly this is a work in progress and the message that handler E generates is not what the server expects, I
have a few of these kinks that need working on (as a result from not having a solid specification yet).