I had enough time, during lockdown, to actually start on some of the ideas I had been wanting to start on for quite some time. I had an idea of something along the lines of XMPP but more generalised. Now I say it in italics because XMPP can actually and is used in a general sense, like for IoT devices - atleast one of the available XMPP daemons, I believe ejabberd, advertised itself as that once. For me though I wanted my own version and I guess as simple as possible - once again I have not read the XMPP specification so I think I might just be on par with it. Anyways, the point is I wanted my own version of it, now… what is it?

A worked example to explain it

So the idea behind the bester protocol is that by itself it is pretty useless except for a few built-in commands for admin but those don’t really do anything. The idea behind bester is that two users let’s call them G and T, because Alice and Bob is overused (and Eve is the weird dude that hangs out in NARGA H in the evenings). So we have a user named G and a user named T, G is connected to server J and so is T (as shown below): 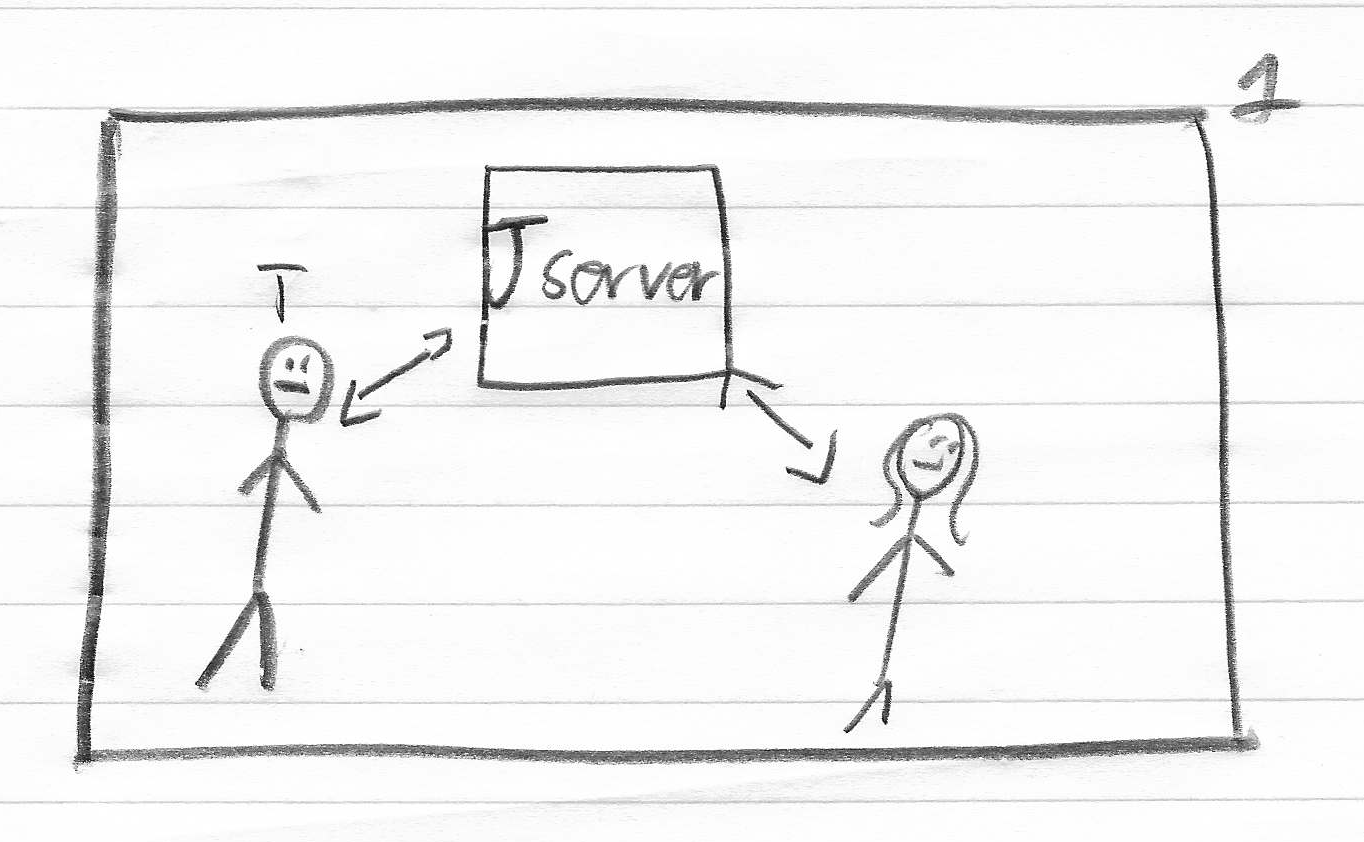 T speaking to G through J

Now let’s say that G and T both have some sort of protocol they know how to speak, perhaps it’s Afrikaans. Now, if T wants to send something encoded in the Afrikaans protocol, to G, then you would expect, in such a server-client model, for the server, J, itself to understand what the protocol is too! This is where the difference with bester comes in, as compared to say now using WhatsApp. In the WhatsApp scenario, that server J, would also need to understand the Afrikaans protocol. With bester, the server doesn’t need to understand it but there must be something then surely that does? Say hello to the message handler!

Every message that follows the bester protocol must include a type field, this indicates to the server, J, which sub-protocol this message is encoded with and to which messgage handler the message should be dispatched to. In this case we can call the little message handler, S (this one’s pretty ambigious). When J was setup, the server administrator made sure that his bester server could handle _Afrikaans _messages so therefore the server J will forward the message sent from T to J. The handler can do really anything it wants in its own space, it runs as a seperate process and communicates with the server over local IPC via a UNIX domain socket.

The message handler, S, exchanging a message and message-response with the server J

Once the processing is done by the message handler S, then there are a few things that can happen. One for sure is that S must send s response, back to J who is waiting for one. This response contains a few built-in commands that can tell the server, J, what to do with the message that S created in reply to J passing on the Afrikaans message from T to it. These commands basically boil down to whether the generated message (by S) should be sent back to clients connected to the server J or if it should be sent to other servers (we will get to this in a moment).

So the idea is that J will receive messages and send back replies to either clients or forward to another server (not discusses yet). The fact that T was able to get the server to send the message encoded in the Afrikaans protocol wasn’t because the server J understood Afrikaans but rather because it knows two built-in commands sendClients and sendServers which are for sending the payload generated by the message handler for Afrikaans, S. S would have seen that within the Afrikaans protocol (because it understands it just like T and G do) there is a field that says who the message must be sent to and because of this, S can process the message it received, generate a new one (a response) and command the server J (who can’t speak or understand Afrikaans) to use the sendClients command to forward it to the correct client attached to the local server J, in this case, client G. 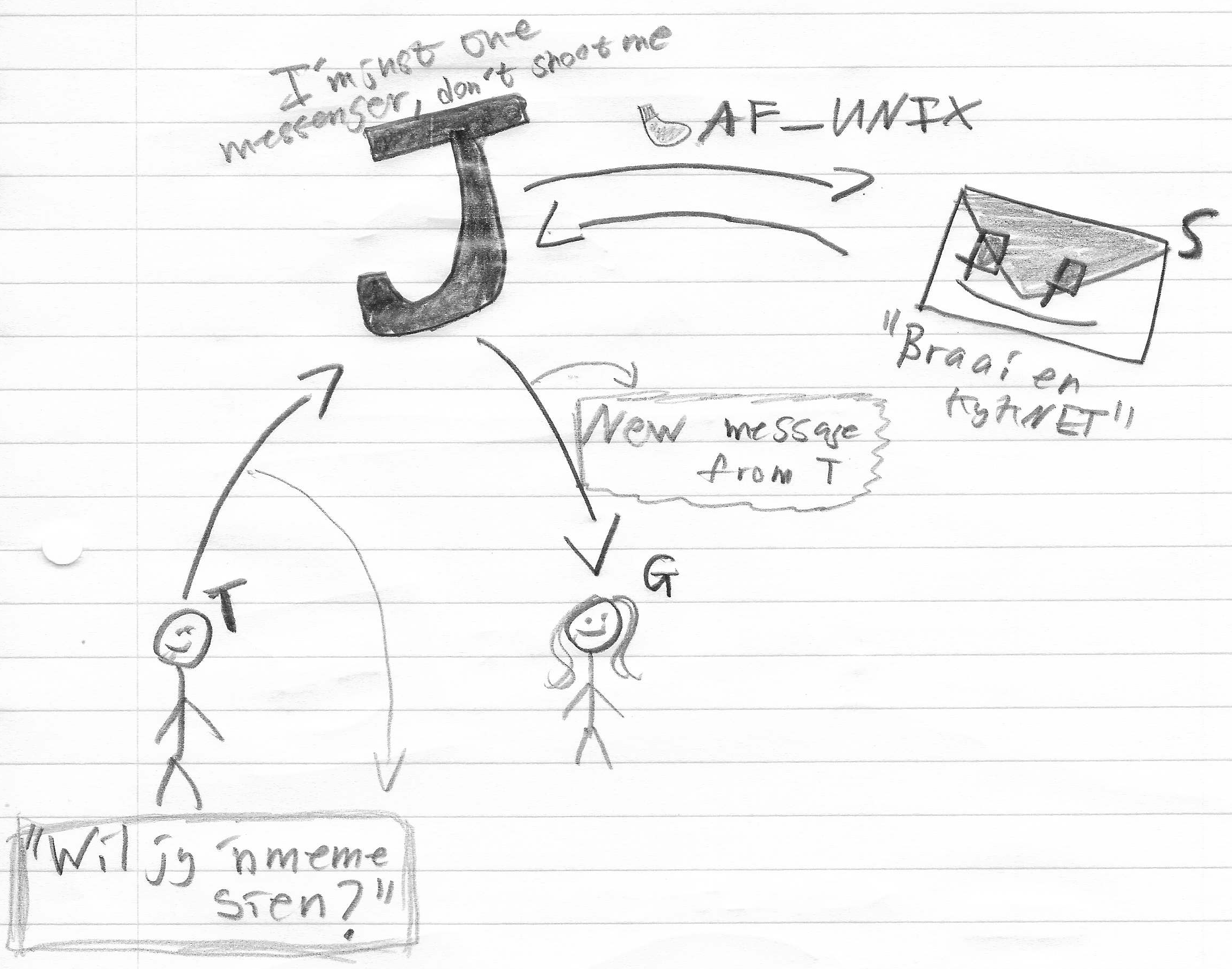 For now that is all, I will be writing on how server-to-server (so think sendServers) communication works and with a worked example too, in the next blog post.

Want to find out more? Here is the GitHub repo.