So, you’ve probably seen the previous blog posts and now have seen that both sendClients and sendServers have been implemented. This post aims to re-iterate those features but with the addition of sendHandler which has been added as well. Things are still rough but I have been able to test it out with sendClients+sendServers+sendHandler all in one setup and it did work. The example I share today is possible but of course requires quite some setup and many…. many handlers. But without further a-do, let’s take a look at an example to explain the system again and then later the real world example I actually deployed.

A worked example to explain it (again)

So we start off with the familiar characters again, the Bester gang, no wait… maybe just “the squad”. There’s a guy, he had something to say and he wants to say it, let’s call him T. In the Bester sense he (T) is a client to a Bester server. Depicted below is T with an envelope with his message he wants to send. The server is the box labeled Magic Machine. 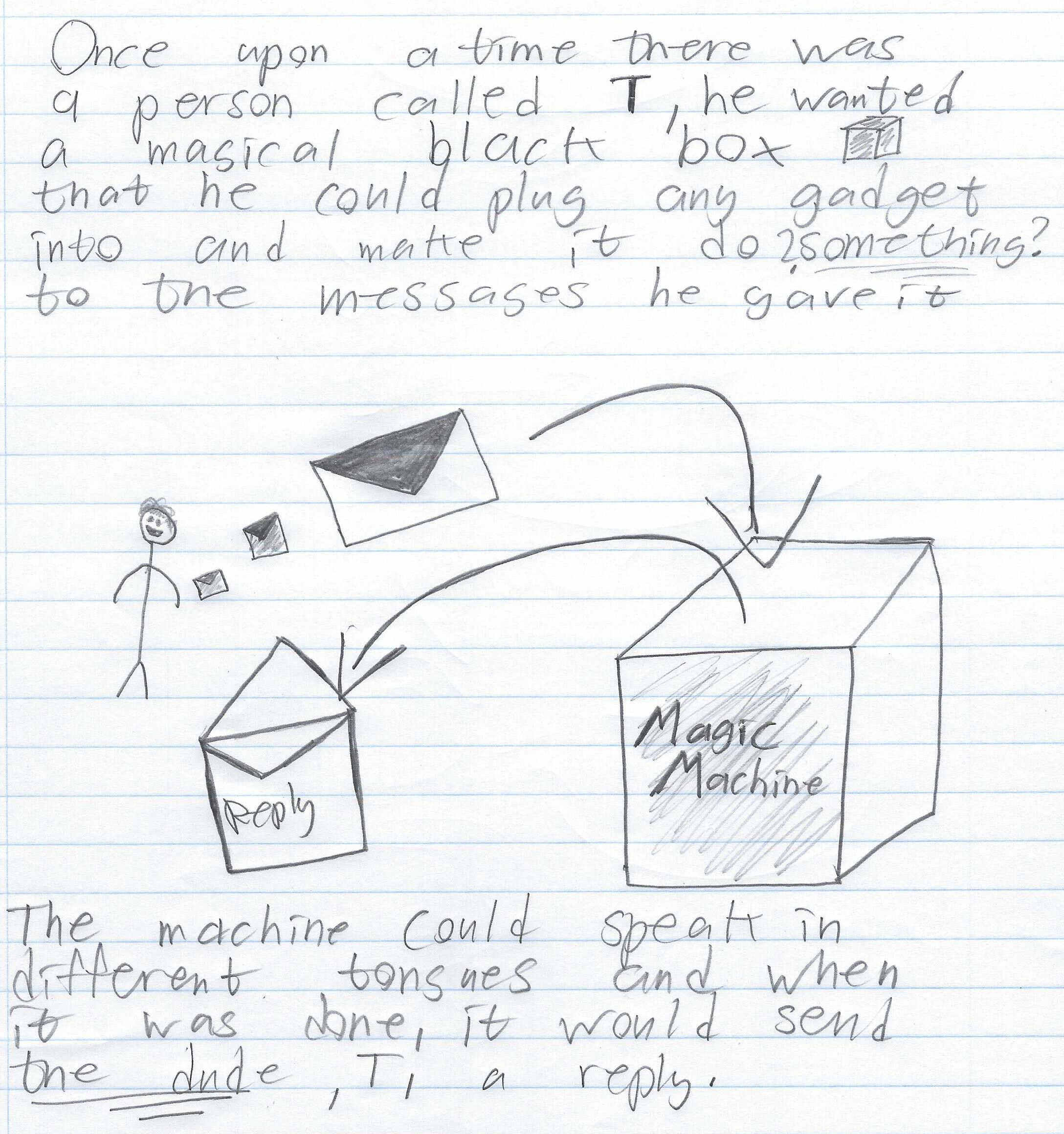 He wants to send a message that speaks in a tongue, the Bester version of this is a message-type or sub-protocol. Luckily his server, the Magic Machine, has a gadget which is another word for a message handler, of the specific tongue (sub-protocol) that the message is encoded in and sendClients is being used here for the reply of the message handler to be routed back to the client, T.

All T has to do is send it to the Magic Machine, get a reply and there you go! But after sometime he got lonely speaking just to himself, so he decided to say hello to his friend G but sadly it was lockdown and T was a law-abiding citizen and adhered to the curfew so they decided to meet virtually. 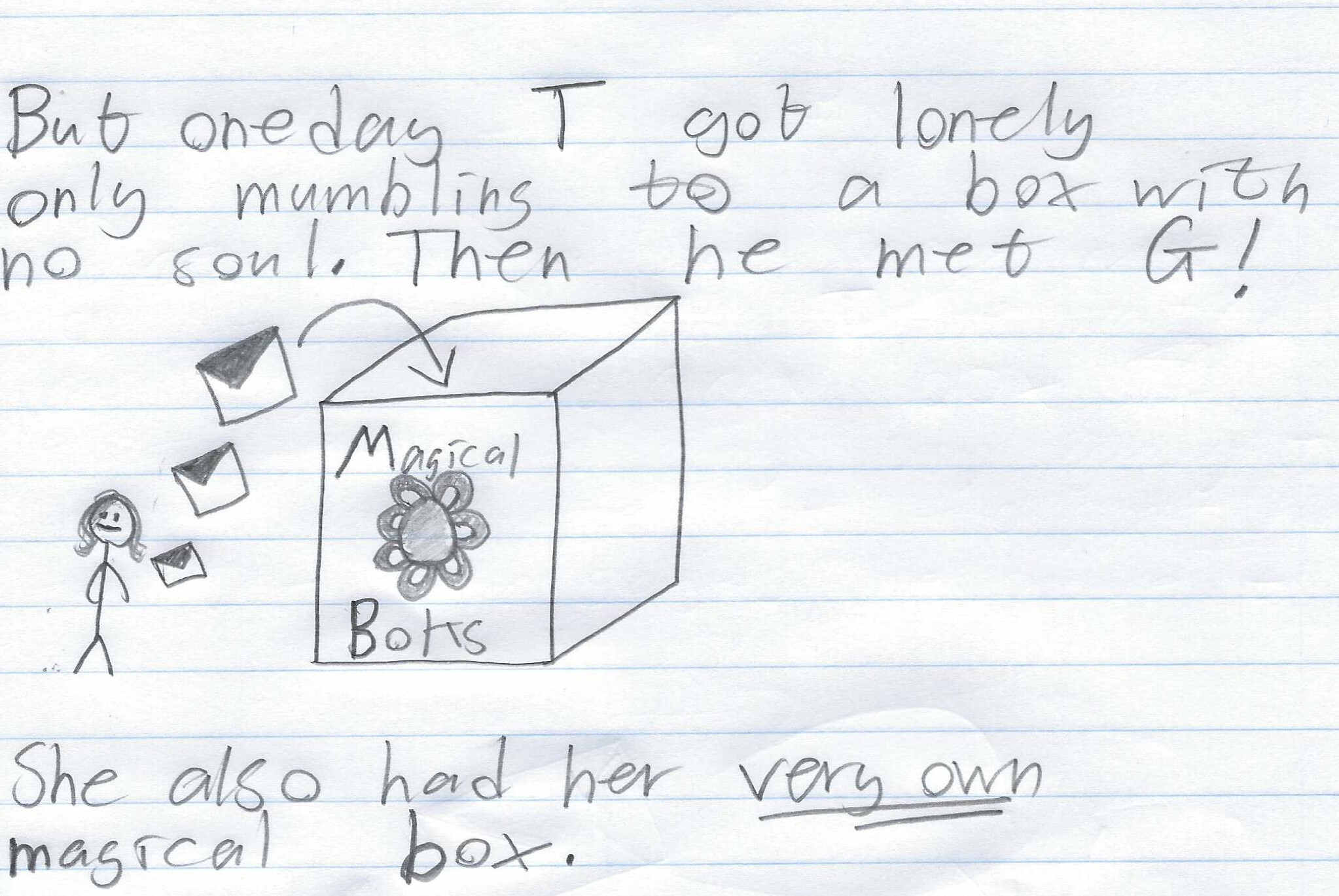 G was in the same position, she was talking to her own Magical Boks, so if both of them were then what’s to stop them from just connecting the two together? Surely all the gadgets in her boks will work with those in T’s? As exciting as this situation was, this was a stumbling block. You see T had gadgets that only spoke English (an example sub-protocol) and G had gadgets (in her boks) that only spoke Afrikaans (an example of a sub-protocol, again).

How could they fix this? Simple, they forgot they they once exchanged copies of their gadgets before because they knew multilingualism was important. All they had to do was to make sure to both have an English and an Afrikaans gadget (message handler) installed in their boxes (servers). This meant that they could exchange both messages in English and Afrikaans, or selectively one or the other if they decided to only attach the Afrikaans gadget.

Quick aside, so far we have two servers that can interact with each other with two possible protocols, either both matching “English” or both matching “Afrikaans” (the possible message types and their associated handlers are what we have been calling gadgets).

This is fantastic, they can now communicate! 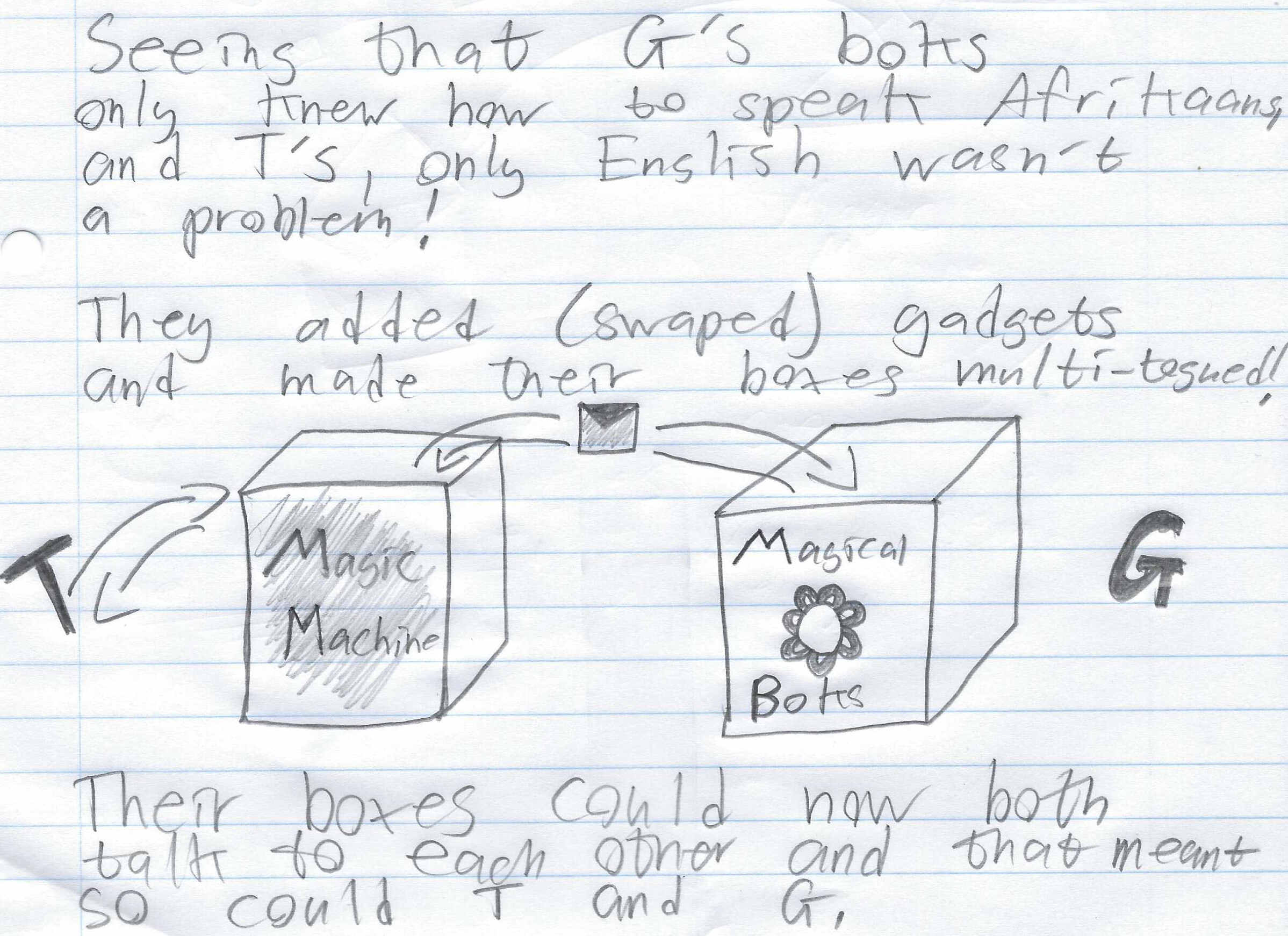 Infact, you could do crazy stuff like this even (server-to-server, via the sendServers command): 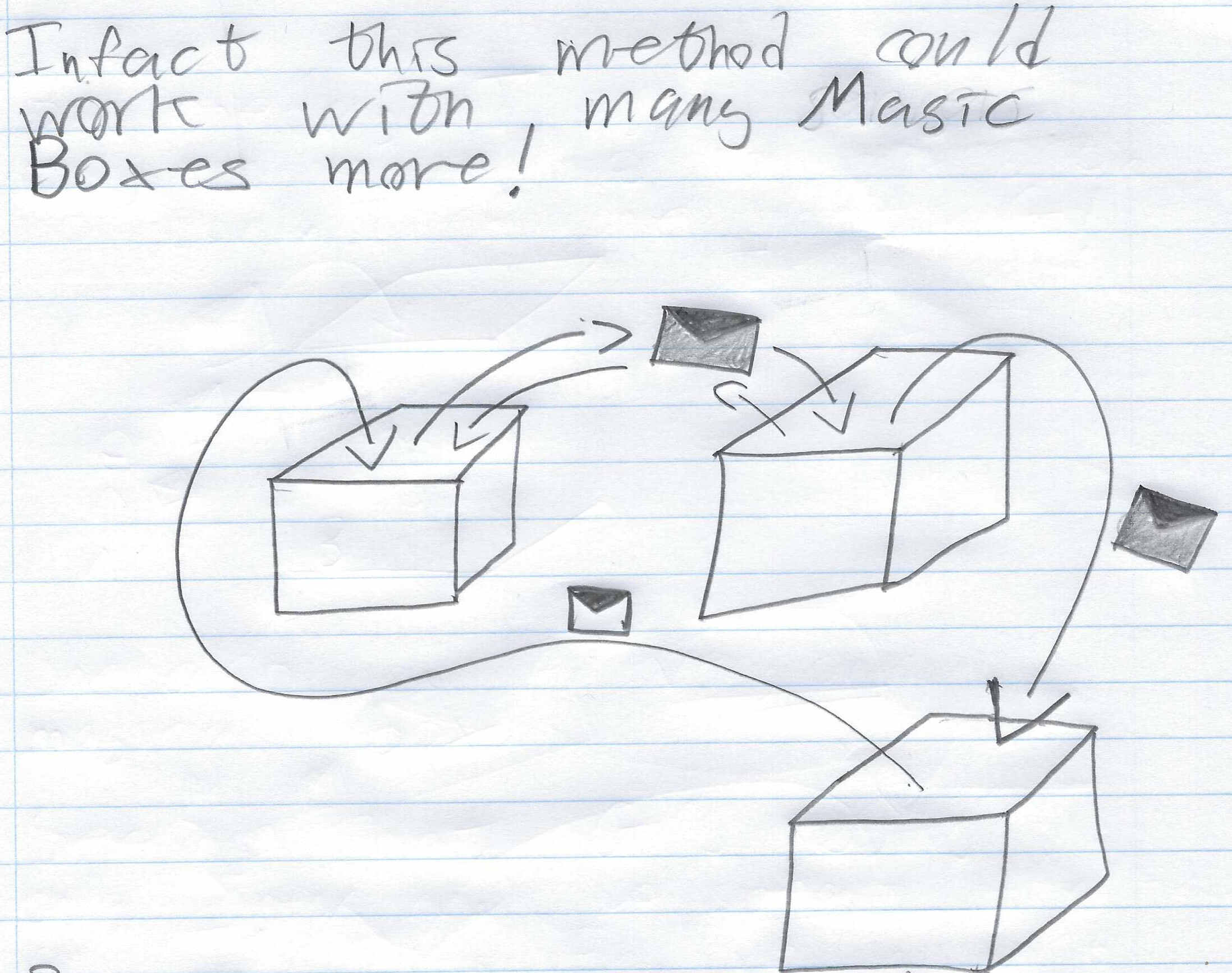 This was really great for the two of them, friends re-united. However, sometimes T wanted to be able to just, you know, speak in the language of a once world-empire, Portuguese! However, G didn’t have the gadget you needed to understand such messages and she didn’t want to purchase it either as none of her friends, except T, spoke Portuguese (how sad). T knew this but he also knew that he could translate the messages on his side (the client translating a message from a type not supported by the server to one that is supported and then only sending it), but he knew this was tiresome and if his box is to be all magical and all then surely it could provide such a feature and T knew he could afford a Portuguese gadget.

T found out that if he added his Portuguese gadget to his magical machine that he could make it work in a way that when a Portuguese-tongued message came in, that gadget (handler), would redirect it’s translated message to the English gadget (also a handler) which would then send it to G’s boks. This, in the Bester sense, is making use of the sendHandler command, and then the sendServers command. 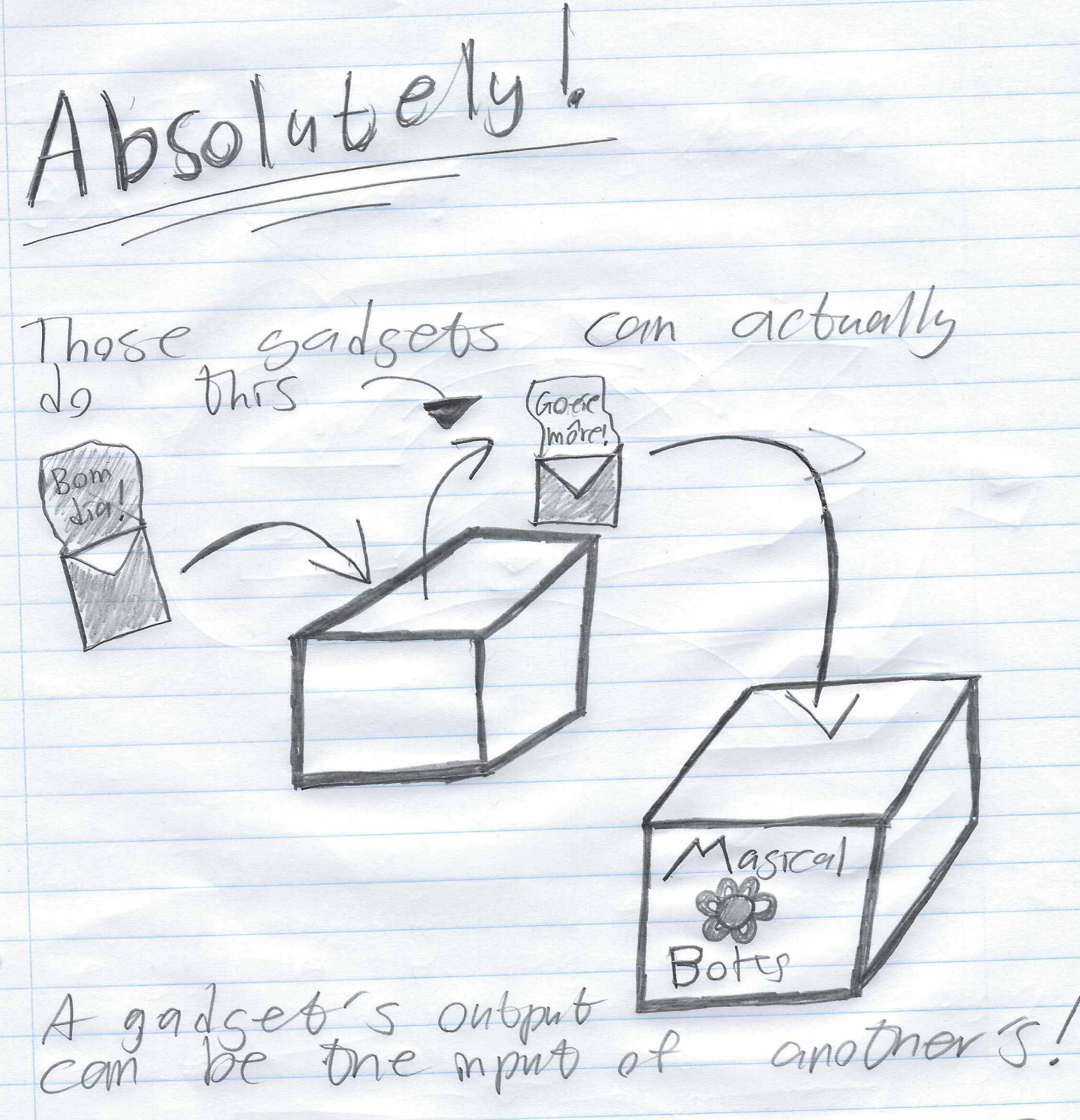 This is the power of Bester, servers connecting to servers with very little clue what the messages they transfer entail but just an understanding of where to send the message-handler’s replies to. With such a system you can write sub-protocols ontop of it to make it do whatever you want. Perhaps a chat protocol, maybe e-mail, maybe something that updates you on the status of your Internet-connected kitchen. Instead of you having to write your own protocol fully - in the sense that you must deal with basic authentication and server-to-server sockets and client-to-server sockets and handler sockets. You just have to construct JSON correctly, that’s all I ask of you, and a little 4 byte size header (in little endian).

Sadly in this world I will first need to write a few handlers and clean up the server’s code before I can convince G to use Bester but as for myself and testing the software goes I was able to construct a topology as shown below. What you see here is a user U1 connected to a server S1 who (U1) then sends a message of type M1 to the server S1. This is then processed by the message handler for type M1, M1. M1 decides to not use sendClients or sendServers as part of its response message back to the server S1 but rather (although not depicted) sends its reply back to S1 with the command sendHandler (stating to send it to M2), finally M2 sends a reply back to the server with command sendServers specifying to send it to server S2.

Server S2 gets the message which has message-type M1, therefore the message handler M1 will take the message and generate a reply and send it back to the server S2 but with the command sendServers specifying to send the reply to server S3.

Server S3 gets the reply, the message is of type M1, it sends it to M1, M1 replies back to S3 with its reply and the command sendClients specifying to send the reply to the client (locally attached only) U2.