Damn, it’s been a really busy last few months with this whole statist lockdown in South Africa. Now to get the politics out of the way - I hate lockdown but damn has it made me productive. It’s in this post that I hope to shed some light on absolutely everything I have been working on in the last few months (which damn has been a lot). I’ll be going through a lot of what life has been like here, what my projects have developed into and the new ones I have created and then lastly the side-projects of mine (the physical things) that I have been working on as of late. I’m writing this in the backseat of my parents' car as we drive down to Stellenbosch to my university to pickup the leftover belongings of mine that were left there the day I left home due to the university closing due to the ‘rona. 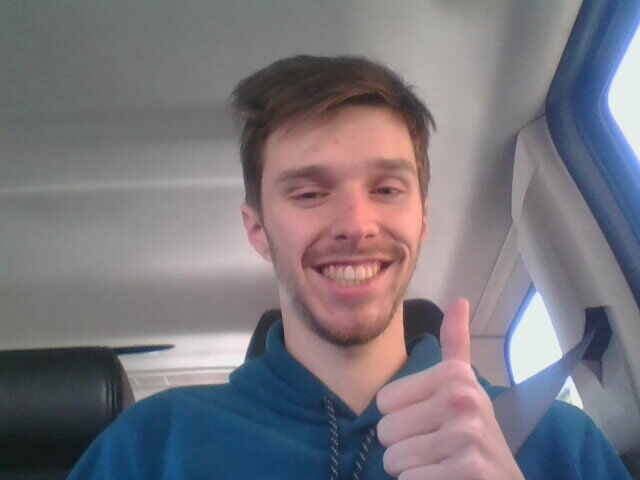 Me in the car's backseat (yes, I still don't have a license)

So let’s get to it then!

Life under lockdown sucks, I mean other than it being an infringement on my rights (and no I don’t care about the constitution’s exceptions made for “disaster management”), it has been really shitty. First of all my birthday will have to be moved possibly because how else are we going to get wine then unless we wait for cunt-worthy regulations (those banning alcahol) to be lifted. The second being that I cannot enjoy campus life as well - this being a centerpiece of what it means to be a part of university culture - this time is stolen from me and I will never get it back - yes, I’m looking at you Stellenbosch Universiteit - y’all really look like damn asses in this situations and it is nothing to be proud of. SO it’ss a whole fuck up from the state level down to the University’s administrators which yes can do what they want if they really wanted but their choice was lame - rather have it open in protest. So now we had to go online and have tests online and all of that - now the semester went well - I got good marks and now I’m on holiday but still I would have preferred being on campus this whole time. Now looking back at it, after how productive I have been, oerhaps not - I am conflicted but what I am assured is that the next semester should be on campus - I have gotten my personal project work that I wanted to cpmplete done, so now let me go back - I’ll have no benefit that I did above here by being at home, so I think then my above protest can be applied for the next semester - it’s valid now!

So what did I get up to? Well, a lot of things, CRXN, BonoboNET, Bester, libutterfly, bformat, skoenlapper, Butterflyd and many more! I’ll describe a little bit of what I worked on during such a productive time in the next section but first - a weather report.

It’s been frikken freezing here in Worcester. Damn, the mountain tops were snowy-as-fuck (saf) and it was super cold but it made the inside of the house very nice and cozy so I enjoyed that aspect of it - in front of the fireplace. 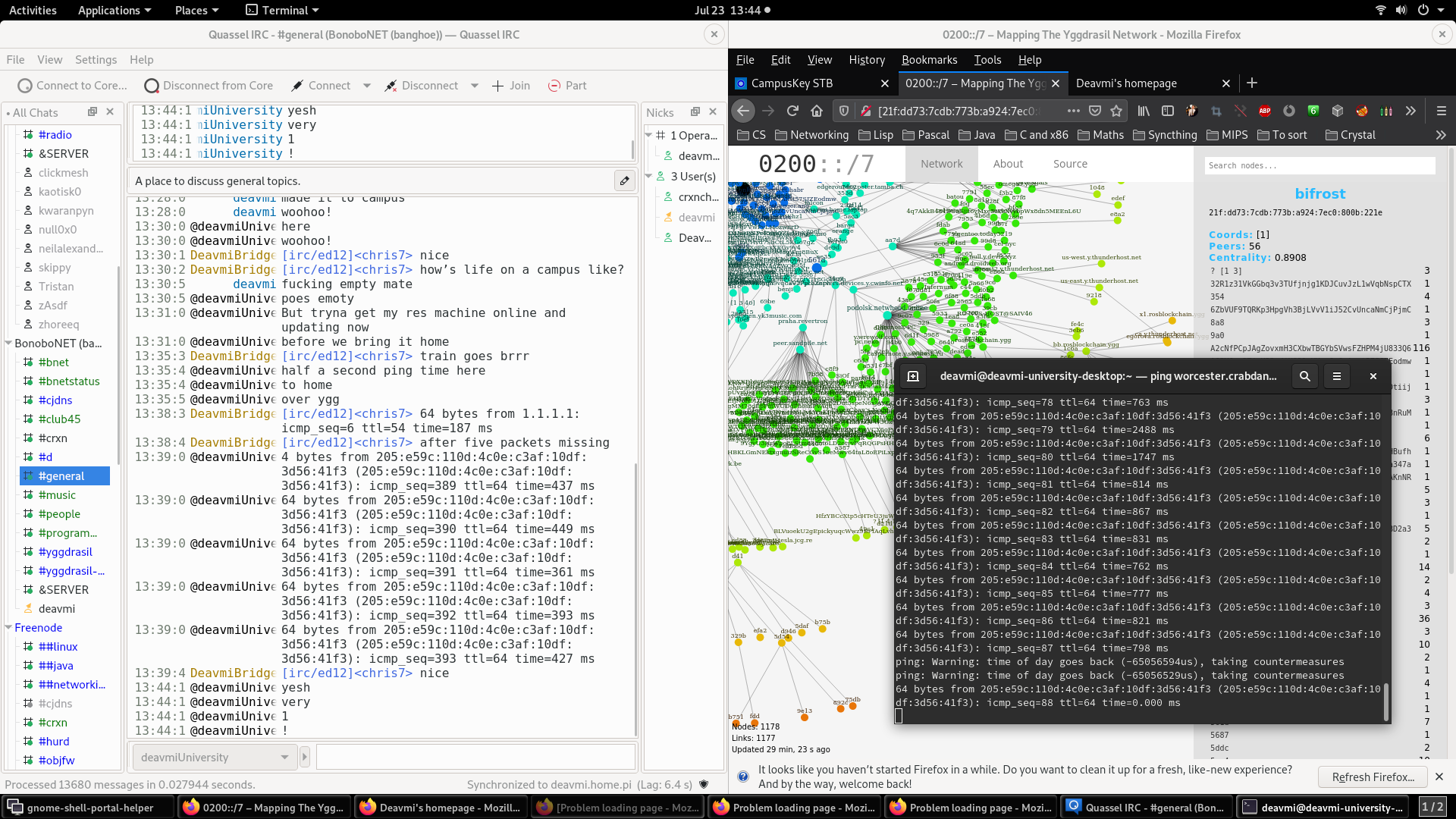 Me in the car's backseat (yes, I still don't have a license)

Photo of my residence desktop screen with firefox, gnome-terminal and quassel irc open, just after arriving at res. Photo of mountains in Pniel (just outside of Stellenbosch)

Now that I am back home from collecting my stuff at Stellenbosch, let’s get to it (politics time is over).

Something I have always wanted to do was to setup an IRC network. The main reasons was because it is easy to do and it is a cool thing to have - I mean chat - that’s super cool! I had played around with the IRC daemon our network uses, ngircd, a few years prior and it was hella easy to get setup with 3 nodes so from there I knew it would be a doable project in a short amount of time. So I got a few things setup. I setup an original node called corona.bnet, because corona is a meme. That machine had Yggdrasil on it so that it could be reachable on a network other than my home IP subnet (which is unreachable by everyone but me on it (and my family of course)). I got some people to come along and connect but I think that was only later, after I had moved the job from that machine to my new machine - lockdown.bnet (and so we say farewell to corona.bnet - the O.G. BNET node!). That machine stayed in place on my server rack in the form of a Raspberry Pi - then a few users started to come along and join in. Next thing you know, I was starting to get people not just on the network but also peering them server-wise as new nodes onto the network making it an actual network not just a one node (lockdown.bnet here) IRC network.

What happened next was what we will call the great split whereby we basically had some folk move over to charybdis (puke mode activated). However, I got some other people to fill their spot server wise - we’re still good friends (laughing emoji). So now we’re on the node count we were previously with one node more!

Setting it up was and still is a very fun past time. It’s fun to see the different ways we can make connections with other nodes, whether it be over the regular internet, over CRXN, Yggdrasil or more! It makes thee already interesting topology even more interesting and having something that we can use to communicate that we, the community, put together it very cool! So BonoboNET is a very fun project because, as I will mention next with CRXN, it is nice to, once you have an IP internet, have something to actually run on top of it and use it for.

**If you’re interested then following this link where
you can get connected and also, if you want to join your ngircd server onto the network.

Something I have been planning for a very long time is to build my own IP inter-network after all of the self-teaching I have done for IP networking and networking in general. I wanted to have something whereby I could setup routing myself, configure the routes then the IP addresses and then the physical aspects like switches and ethernet cables and so on and so on. That came to life during lockdown. I set a day aside to configure my network. I decided I now could put my 3 Raspberry Pis (I now have 5) to good use. I setup the two to both be routers, and placed a switch in between them and then one on either side (so three in total). You can’t see the two switches in the above photo but we will get to them later. So, as I was saying, I went ahead and configured the whole thing. Got subnets assigned both sides (so routes added), enabled forwarding and then placed a machine on either end and did a test ping, and not much to my surprise **it

worked!** (As I had done this before). Now over the time I would come to realize that I need to get other people on this network to make it more interesting.

Now, I wanted to get more things and people onto CRXN really badly - so I did what I knew best - spam it everywhere! I first did a test run of using Yggdrasil’s Crypto-Key routing, which let’s you tunnel traffic from one node to another such that it pops up on the tun0 interface on the destination node’s side - ready for accepting into the kernel’s networking stack. I did that between a machine of mine and a VM (the final time, as I had done earlier tests but this was a working one - working properly that is). I saw that that was working and then came the first interesting part to the addition of new routes into the inter-network, Chris’s IPv6 NETMAPPING router.

Chris and I linked up and I added a route on my side for 10.5.0.1/32 to point to his Yggdrasil node so he could do NETMAP-NAT, which would mean he could make the whole of CRXN available, through NAT, on the IPv6 Internet. This means any traffic coming in would be an IPv6 packet that then would strip it into payload and place in in an IPv4 packet with the source IP of 10.5.0.1 and then the destination IP that is a result of the mapping function of getIPv4(IPv6In) - something that Chris. defined his side. This is a neat feature to have on the network as now we have every device available and through the best type of NAT - one that allows raw sockets, so instead of port-mapping we have address mapping!

After getting the hang f Yggdrasil’s CKR I started to get a lot of people on the network by this method (and still have many more who want to join it - so much so I should start thinking about network structuring at this point). Another method I should look to in the future is using CJDNS for this as well - it too has a CKR feature which I can use for those who want to get peered with CJDNS or for the same Yggdrasil peerings I have to have a redundant backup! Another thing that would be nice would be to see Lokinet introducing CKR at some point in time - that would mean I would have 3 methods of tunneling available that I could use for those who lack the other overlay networks or to increase redundancy between existing links.

So now for a deep dive into what the network consists of my side, routers, switches, hosts and a lot of wires! Home ethernet switch (where my network stuff begins - from my room) The extension of the switch inside, this is just for more ports on the same ethernet network - that's all
- but located in the garage rather so my machines can be connected to it instead of all back to my
bedroom's switch which would be messy 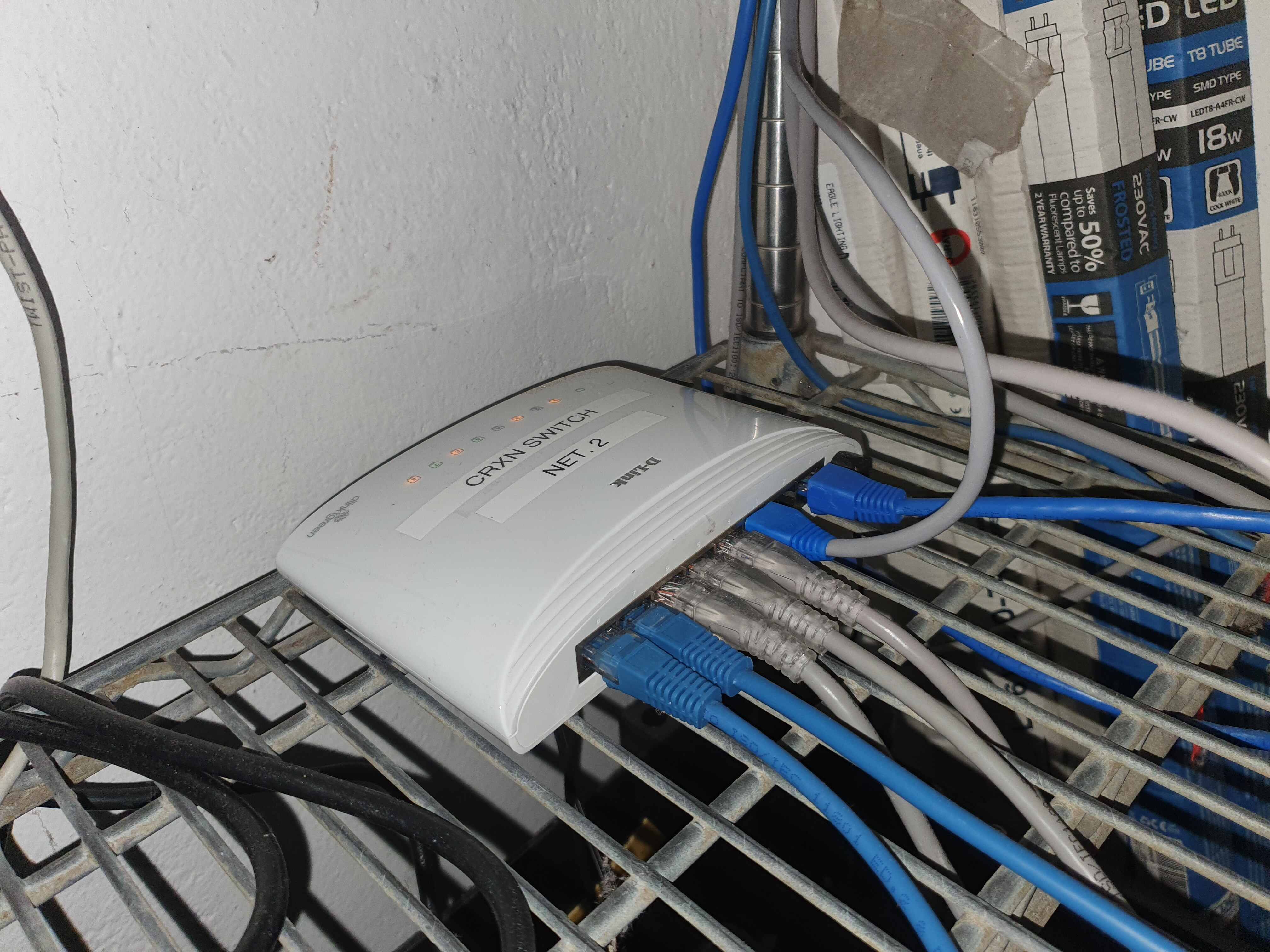 Now what am I running on CRXN? Well, the next machines you will see, silverfish (bernd), brink, jaco and bester are used for various different things. Currently I run on the network services for public consumption on bester, this includes a KiwiIRC instance for web irc access to BonoboNET, ssh-chat (a shell server where the shell is a chat program), a few matterbridge instances to bridge BonoboNET to what will be a volatile IRC joining (on a few channels), a gitea instance (which I use for git mirroring), a redmine instance (for managing projects and media files for project notes and such type of documents that aren’t suitable for a repository). _Silverfish

_or bernd I use for software testing for Butterfly and such with several docker containers, jaco All of my machines, from left to right - Silverfish (Bernd), Brink, Jaco, Bester

And a few more close ups whereby you can see how well I have labeled everything. Silverfish (Bernd) - I wanted more blinky lights on the CRXN side so I added more ethernet but considering the way ARP works, one is always useless
and only sends out periodic traffic - I might do some batman stuff on it though - so no more CRXN for it! Brink, Jaco and Bester (sitting in a tree, well, umh a shelf) - I like this scene very much, not what I just described
but you know that one meme... Laptop for managing the machines indirectly Monitor for direct attachment to machines

And that concludes CRXN stuffies! It also concludes part 1 of this blog as I have written a lot and want to relax now, so stay tuned for tomorrow evening when I publish part 2!